Moose said that as long as I was cutting up his muslin (see previous post) I should try some gesso experiments. I've used gesso as a resist on all kinds of paper but never on fabric and it seems like less effort than batik. 🙂 I'm also still working on that wonderful blending of orange, green and purple that I like to call 'octarine' (a la Terry Pratchett). All of this is in aid of a future project that gets more massive the longer I plan. I should stop planning and just do it, but this experimentation really is part of it. Really. Really!

Anyway, I started by tinting plain, rather thick white gesso with a little Naples Yellow Golden fluid acrylic because I didn't want stark contrast and I wasn't sure how much it would be stained by the sprays. Turns out I could have used more tint, but it's okay. Then I used a palette knife to scrape it through a couple of stencils and 'freehand' onto the muslin. My gesso is thick enough and the layer I scraped on was thin enough that I didn't have any problems with seeping under the stencils or pooling and sticking to my work surface, but I did this on waxed paper just in case. 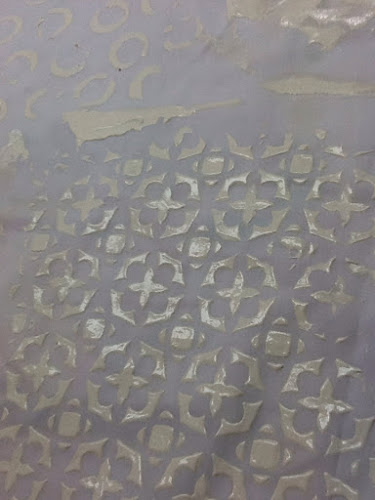 I let the gesso dry completely and wet the fabric with a mister until it was wet but not soaked. I used dye sprays, orange Colorwash and crushed grape and dirty martini Dylusions. Yes, I know Dylusions aren't meant for fabric, but they're what I had in the colors I wanted. I'm not going to wear this or wash it. 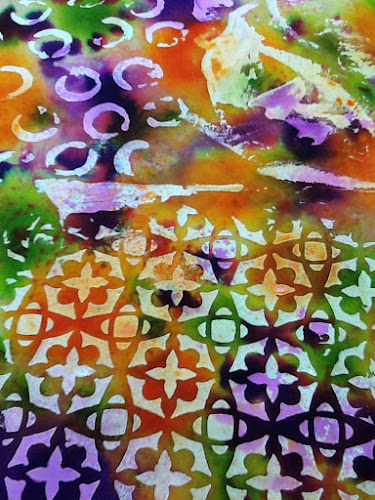 The purple stained the gesso most, then the orange, and the green almost not at all. I let this dry completely and decided the purple wasn't dark enough. There were also some pink and blue places that, although cool, were not what I wanted. 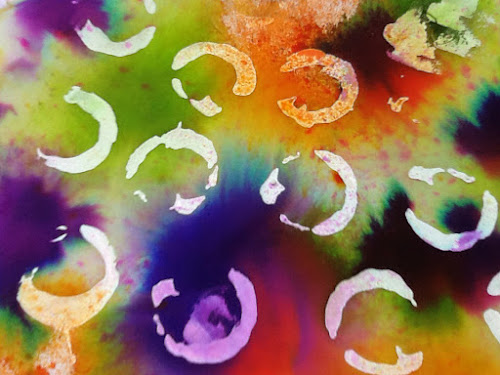 So here the final product. 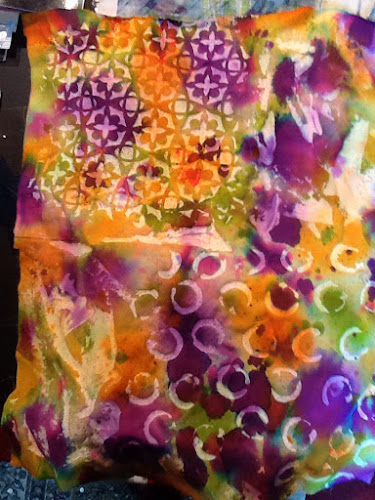 As cool as this is, I think I may like the back better! The gesso didn't permeate the fabric completely so the contrast isn't as great but the texture is still there. 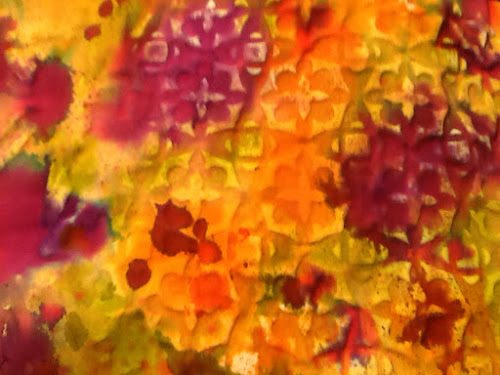 Another shot of the back. The gesso makes a slight relief here: 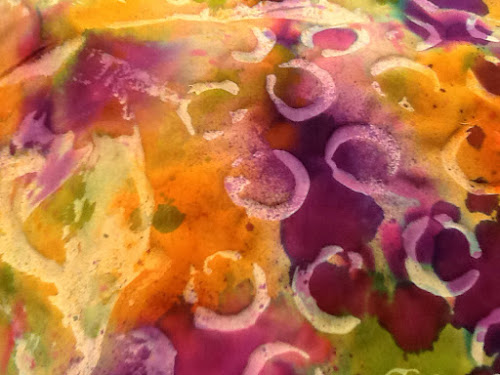 There's some nice blending in here. Not as nice as on watercolor paper, but nice enough. I think I might try it on linen if I can find some. That's for another day, however. Seems we get one nice day out of this holiday weekend, and I'm going out to enjoy what's left of it!