Yes, it's been a while. I've been working on a few things but nothing finished so far. I'm always doing other things in the spring, although it's been a slow spring to get going here.

I'm finished with this journal spread unless I decide to actually journal on it. It was mainly an experiment with shading. Next time I won't use the mechanical pencil to do the outlines. I used charcoal for all the shading over Dylusions sprays and stamping using Archival ink, then a couple of layers of workable fixative. 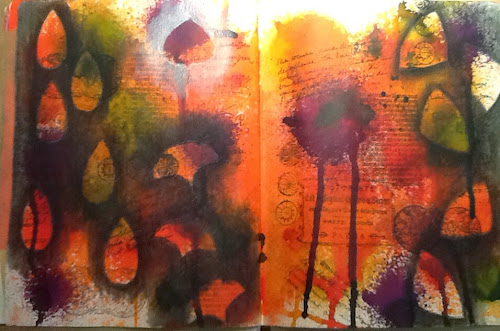 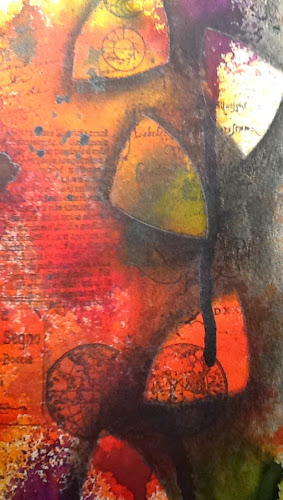 We've reached the end of March without much sign of spring here in VT except a few disappointed red-wing blackbirds who hung around the feeders out back for a couple of days. I suspect they've retreated south again; I heard a distinct “WTF?” In the usual red-wing calls. We're nursing another sick cat, and when I can't entice him to sleep on my lap, I've been working on this journal spread. 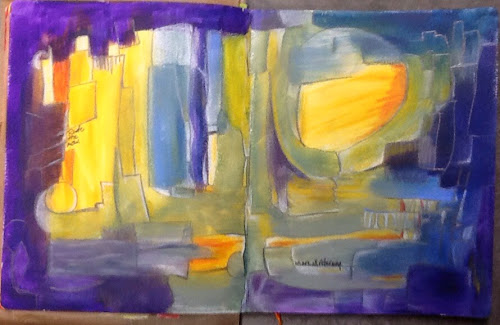 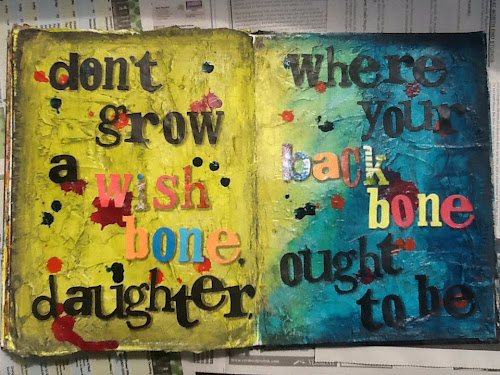 I love this quote. I decided to use it on the second plastered (joint compound) spread, this one in my Strathmore journal. I did the same thing in this that I did in the Moleskine but I probably could have skipped the tissue as it doesn't really show through; I was much more liberal with the joint compound and sealed it before painting this time so it didn't wear off. I also used a watered down charcoal gray acrylic over all to bring out the texture and a few India and acrylic ink splots for contrast. 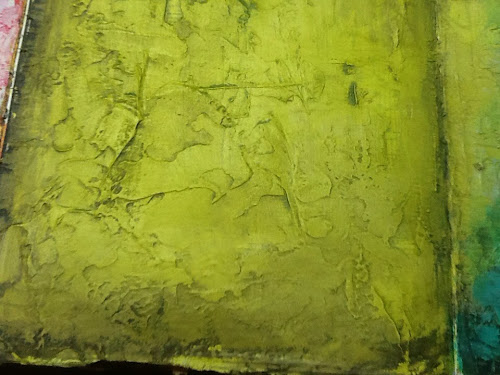 Tim Holtz Bigz alpha die letters. Love this die and was definitely worth buying (on sale!) but had to shim it ever so slightly in the center–literally, a piece of cardstock taped to the back center did it–or some of the letters wouldn't cut cleanly. Shaded the letters with charcoal–it's the details! 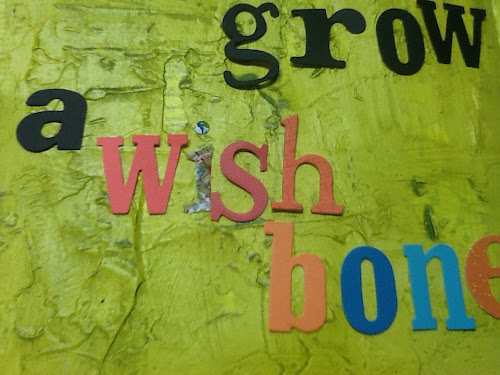 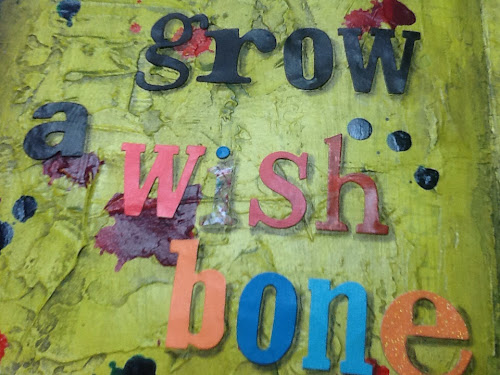 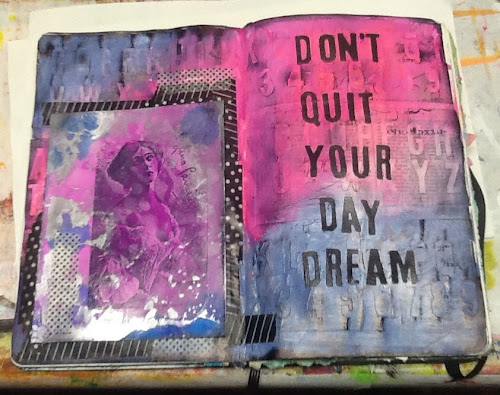 Remember that song? I mean the old one, by the Monkees. 😉 This spread in my Moleskine journal started as several waste strips from a Tim Hotz alpha die from different papers: a map, an old dictionary page, and Coredinations paper. Glued those down with Collage Pauge and painted over with matte acrylics mixed with gesso. I did some really light stamping with black Archival and a text stamp and wondered what to do next. 😉 I noticed some Ranger glossy cardstock I hadn't used yet and decided to do something I haven't done in ages: use a photo stamp. First, though, I wanted to try some techniques that were the reason I bought that cardstock in the first place. I got out some alcohol inks and the alcohol (70%, the non-drinking kind) and played around. I used two regular colors of Adirondack and the silver metallic. I had too much silver to start and had to work a bit to move it out of the center. I used the rubbing alcohol to create lighter areas, splats and splotches. I kept working it until I was happy with the look, even using white Dylusions spray and wiping it off at one point to mute the brightness some. Then I got out the brayer and the black Archival. I think this might be a stamp by Elements but I have no idea. It's one of the last photo stamps I bought, years ago, at Ruby Dog's Art House in Vancouver. I remember when photo stamps were the rage and going through piles of glossy cardstock trying to get a perfect stamped image. Gah. This is good enough. What looks like white is silver; that's glare. 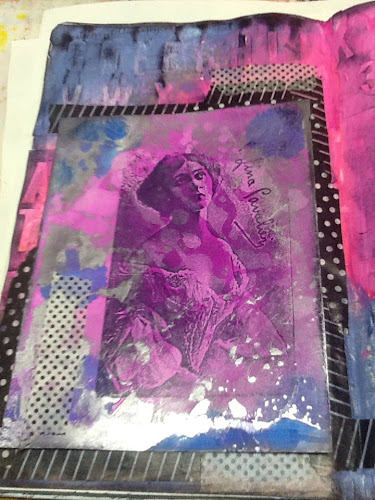 I put some washi tape down first as a sort of frame and stuck the photo down with foam tape. Then I added the quote–found on Pinterest–using letters from that Tim Holtz alphabet die. I finished off by rubbing some black Archival around the photo and on and around the edges of the pages. It really makes pages more dimensional so don't skip it! 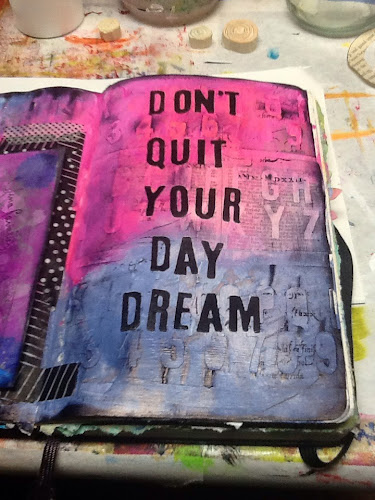 A bit busy, but that's okay. I'm less timid lately so my pages are less sparse. More like the rest of my life… 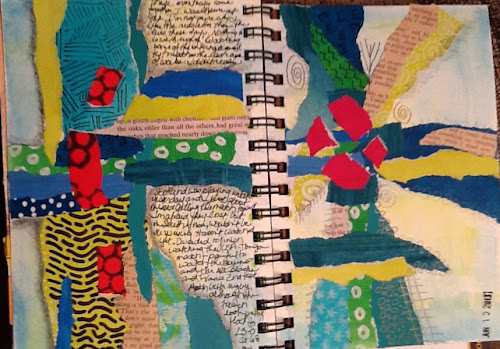 I tried a different way of blending the collage papers into the background (right) but I'm not fond of it. I still prefer shading with graphite pencil. Not sure why blues and greens don't give me the same kick as reds and oranges. It's summer, after all, even in Vermont. I'm just digging the warm colors and that's that.

Still having fun with the cruciform shape. 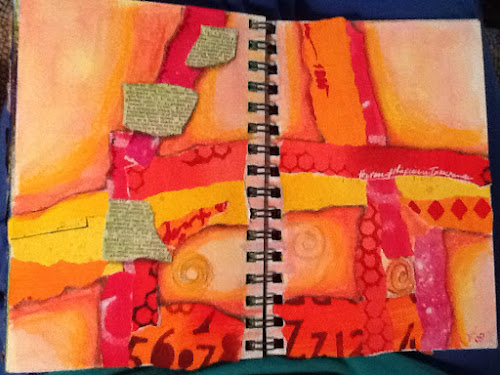 I love Daniel Torrente's designs for Stampotique Originals. I also love Dyan Reaveley's Say It How It Is stamps. I combined two in this journal page with a gesso-through-stencil base under Dylusions inks. I probably need something else in the foreground here but I don't know what it is yet. 😉 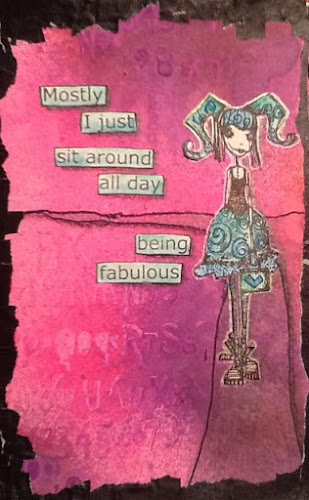 Got Dina Wakley’s new book, Art Journal Freedom, last week and I think it’s the best art book buy I’ve ever made. It’s kind of funny because when it became available for preorder on Amazon I ordered it because I like her style; I didn’t realize it was based on lessons in composition (I know, read the subtitle!) and color. I think I do okay with color (orange obsession aside) but I need help with composition; too much left-brain influence. I like Dina’s writing style, too. It’s intelligent, engaging, and encouraging, a combination that seems hard to achieve.
I started a journal page based on the second chapter (the first chapter is a materials list, good stuff for beginners), then discovered my lovely squares are too big for the page. Oops, oh well, as Dina says! I used scraps to make rectangles (so my page has asymmetrical symmetry) and I started a canvas to use with the squares.
Here’s the journal page. More photos of the rest on the DRCH Studio Facebook page

Okay, here’s the last one of my creepy pages using my new Stampotique stamps. Fittingly, it’s also the last page in this journal. I expect to use this stamp a lot.
I’m working on other stuff, believe it or not. Trouble is, every time I sit down I get a cat on my lap!

I have to share this page now, although I’m not happy with the photos I have, but Willie is sleeping on my lap so no running down to the studio to take more. 😉 I received my first Stampotique stamps yesterday and I had to use them. I’m not a big fan of wood-mounted stamps as they take up more room than unmounted, but these are quality stamps and a joy to use! These are by Daniel Torrente & Jill Penney and I love their designs. The background rocks, in my opinion. It started as neutral-colored acrylic paint. I used (a lot of) masking tape and sprayed with Colorwash and Dylusions and then sprayed with water and blotted it off. Love the effect! I stamped and watercolored the Stampotique images and glued them on and used a couple of Clearstamp Halloween stamps right on the page.