A month has flown by since I posted last. Incredible. I've always kept the holiday hubbub to a minimum, but I've been investing energy in plenty of other places and suddenly the end of the year is nigh.

I've been spending time in the studio–some of it cleaning!–mostly on experiments and not so many finished pieces. I've got pieces from all the Text & Image lessons, just nothing to the point it feels ready to put out there. And some of them are lost in the piles I've been moving around, along with a couple of other things I'm looking for. Sigh.

I did work more on one lesson 3 piece at Jane's suggestion, and toned it down. You can see the previous stage in an earlier post. Definitely less overpowering. I think it still may not be done but here's the next stage: 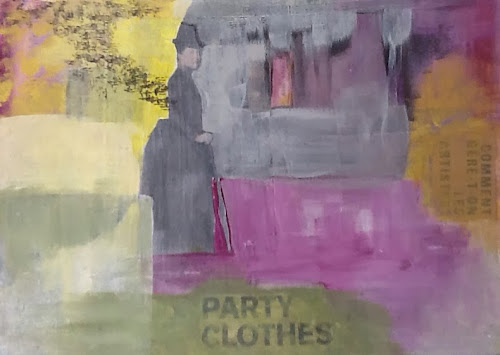 I have found things while cleaning the studio, too, one of which has triggered some experiments I'm pretty lit up about. I also found my box of Secondary Color Canvas pieces, so I'm committed to doing some serious work on that project in the coming months. I think it's a good idea to go into a new year with intentions rather than resolutions. In fact, 'Intention' is my word for 2014. One of my intentions is to put my word for the year 'out there' more, so here's a start!

Okay, Lesson 2 at last. My Golden gel and matte mediums always seem too dry and stiff for image transfer so I tried using Utrecht matte medium and I like it better; the transfers are a bit thinner and stretchier than with Golden but they're smoother and less likely to crack.

Here's my first piece. This is an image from a Dover royalty-free CD. I call her 'The Frenchwoman' because she reminds me of a figure from a Seurat painting, so I went with an impressionist feel. The background text is all in French. I found the headline on the right in a Montreal newspaper; it translates as “How does one manage artists?”, which gave me a chuckle. 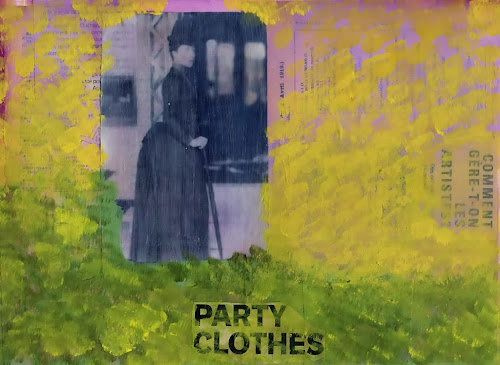 The one below is me at about 3 or 4. All the background text is from a 1968 Jack and Jill magazine–but don't let me date myself…I was trying to go with a kind of childlike painting technique. Not sure I like it but the colors are good. 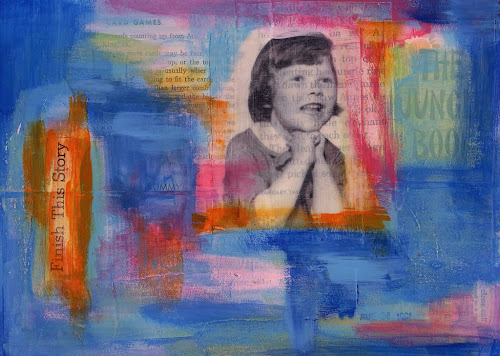 Here are three collages for a lesson in Jane Davies' color online class. The first is the monochrome: 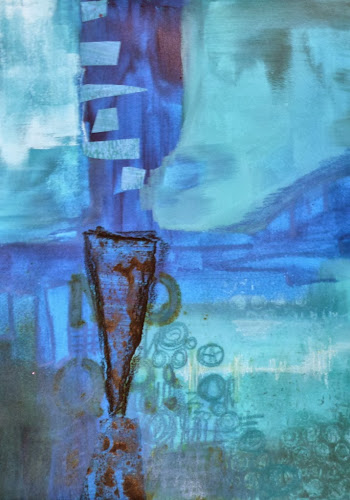 I used green blue and blue in this, as well as black and white, and the partly hidden letters are blue neutralized with orange. Mostly paint with a bit of cut paper and some doodling with watercolor crayon. 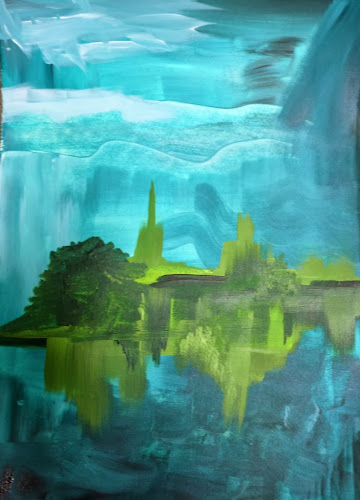 This started with a green blue background and then a green and yellow green island appeared. All paint. I think I'll add some even lighter tints to the 'island' although this isn't as dark in real life as it appears.

And here's a complementary collage. I had a hard time finishing this one. The pinkish circles were bright red violet to start but that seemed too intense (even for me) so I knocked them back and now…they need something. Texture? Fine detail? So this is probably NOT finished! 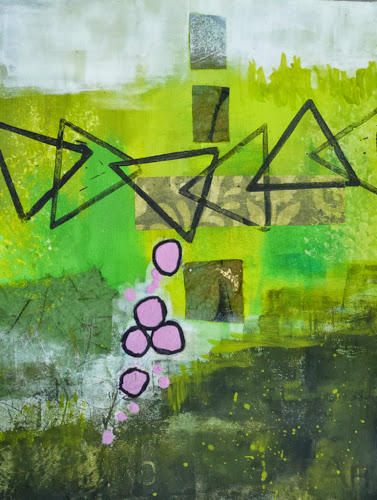 Yes, I've been MIA, but there has been action behind the scenes, as I'm enrolled in Jane Davies' Unlocking the Secrets of Color class. Fun! Here are the pieces I did for the latest lesson. I love Jane's classes; I always learn something, which is more important to me than I thought it would be when it came to art. 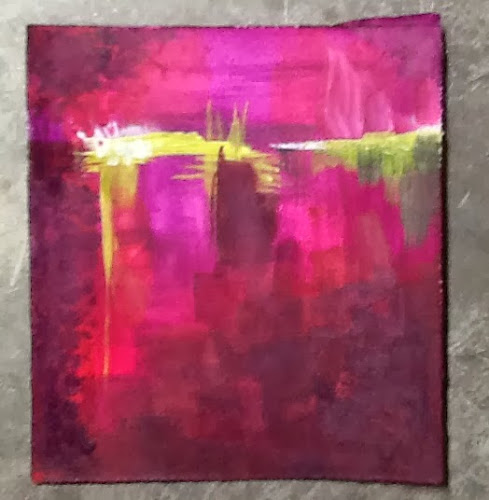 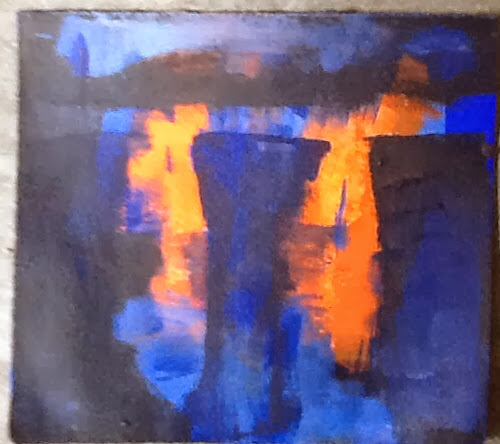 Those were the complementary pieces. Here are a couple of the monochromatics: 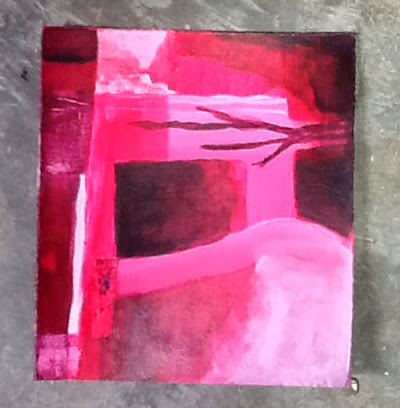 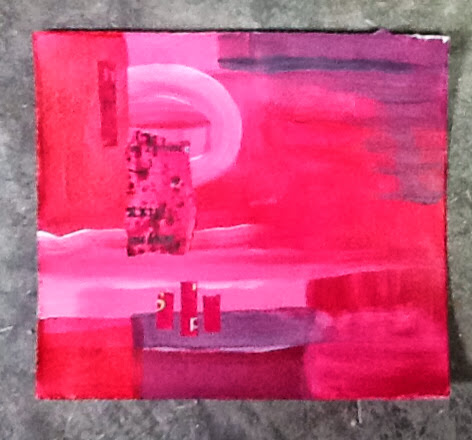 I started an analogous piece, but like I said in my workshop blog post, it's due for an extreme makeover!

Here's a piece from Lesson 5. The rest are here . Stay tuned! 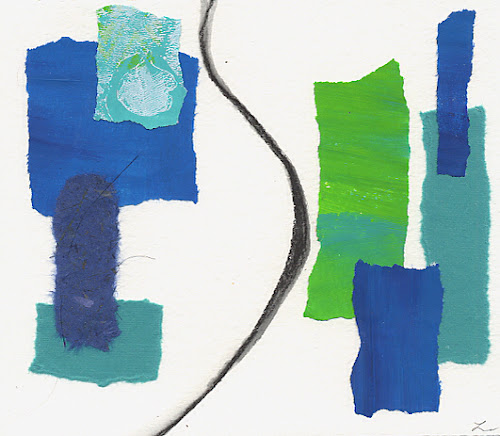 I'm taking an online class from Jane Davies right now as part of my intent to improve my composition skills. I'm really enjoying it and wish I could spend more time at it. Which one of Murphy's Laws is it that says as soon as you commit to something fun, work intensifies? Anyway, this is a mini cruciform study, probably my favorite of the six 4x4s I did. You can see them all here 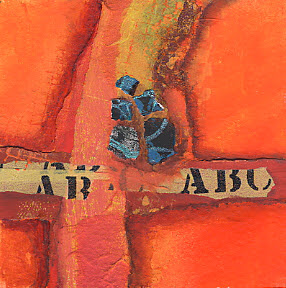